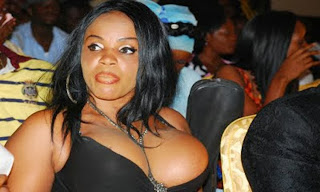 Controversial Nollywood actress and singer, Cossy Orjiakor, has been approached by an American company to insure her breasts for 1.6 million dollars

The American company that approached her, Enhanced Silicón Inc, is believed to be responsible for insuring the breasts of famous foreign celebrities including Dolly Parton and Pamela Anderson.

Cossy is expected to travel to Los Angeles in about two weeks to formalise the contract. Speaking on the insurance, Cossy said, "I specifically asked for $1.6

million, to show Stella Oduah that you don't have to misuse public funds to get what you want."

Reports say the contract includes clauses that limit the number of times people can touch Cossy's breasts in a month and that each breast will now be treated as a separate person. The implication of this

is that Enhanced Silicon Inc.

Will henceforth, decide the amount producers will pay per breast, for appearance in a movie.

While Cossy seems pretty excited about the deal, she said, "The downside of the deal is that I may get dressed more often now.

« Man Shoots Woman Dead Because He Thought She Was A MONKEY!!!
Mor Okonkwo Dumps Fred Amata For New Rich Lover »