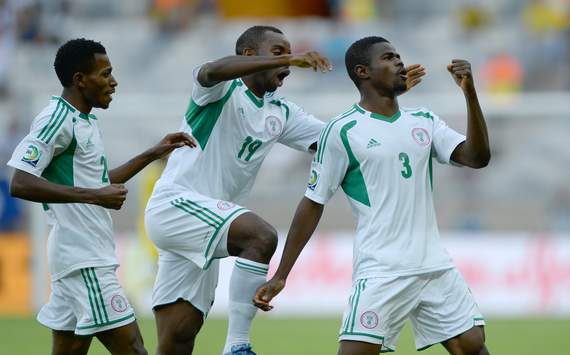 Nigeria kicked off their Confederations Cup campaign with a predictably facile 6-1 victory over a game but painfully limited Tahiti side. Nnamdi Oduamadi helped himself to a hat-trick, Uwa Echiejile struck twice with two deflected efforts, while Jonathan Tehau also put through his own net.The latter also struck at the right end, with a towering header, but despite their best efforts, the OFC Nations Cup champions could have lost by a lot more, with their opponents having spurned numerous one-on-ones by rather disrespectfully trying to walk the ball into the net.With Tahiti having arrived in Brazil boasting just one full-time professional player, it was always expected that they would be on the receiving end of some heavy beatings.Unsurprising then, that the neutrals in attendance were very much behind the side from the South Pacific, cheering every early touch and greeting the first shot of the game, from Vincent Simon, like a goal.Their sympathy for the side from the South Pacific only intensified after watching the desperately unfortunate way in which they fell behind. Not only did a speculative strike from Echiejile take two deflections on its way past a helpless Xavier Samin, the ball had only arrived at the feet of the Nigeria full-back because Joel Aguilar had got in the way of an attempted Tahitian clearance.Nigeria’s second goal, which arrived just five minutes later, was only less calamitous, with Heimano Bourebare, under no pressure at all, passing the ball straight to Ahmed Musa deep inside his own half. The CSKA Moscow ace immediately fed Oduamadi, who cut inside Teheivarii Ludivon before coolly slotting the ball high past Samin.Tahiti gifted their opponents another goal on 27 minutes, with poor Samin spilling the most routine of low crosses at the feet of Oduamadi, leaving the forward with a two-yard tap-in.Nigeria could have added further goals before the break, with Anthony Ujah and Sunday Mba both guilty of butchering one-on-ones. However, Tahiti really should have got off the mark on 43 minutes but the lively Steevy Chong Hue, who tormented the Nigerian back four with his pace and quick feet every time he got on the ball, wastefully headed wide from a most inviting cross from Ricky Aitamai.Nigeria continued to squander gilt-edged opportunities after the restart, with Musa firing wide with the goal at his mercy, and their profligacy was finally punished – much to the delight of a now partisan crowd – when Jonathan Tehaurose majestically above Efe Ambrose at the back post to head home a Marama Vahirua corner.Unfortunately for the two men involved in arguably the most famous goal in the history of Tahitian football history, they were also both involved in their side falling three goals behind once again on 68 minutes, with Tehauputting through his own goal, after Vahirua had turned the ball over in midfield before then deflecting a cross goalwards as he tried to make amends for his error.There was to be no sensational comeback, though, because Aide Ideye came off the bench to set up Oduamadi for his hat-trick goal, leaving the forward with the simplest of finishes with a low cross, before Echiejile got his name on the scoresheet for certain with a low strike from eight yards out.Nigeria’s next match is against South American champions, Uruguay