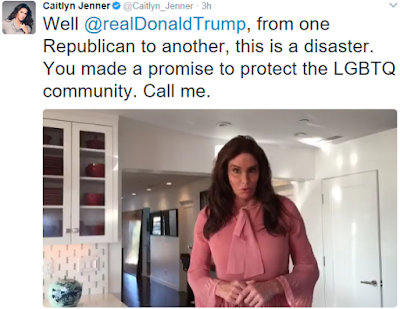 Republican and transgender activist, Caitlyn Jenner, who was a great supporter of Donald Trump is speaking out against President Donald Trump‘s latest move to lift federal protections for transgender students, which Pres Obama ordered. Obama’s federal order stated that transgender students should be allowed to use public school bathrooms that matched their chosen gender identity. President Trump rolled back the order and gave the authority to states to decide on what to do.
Apparently Caitlyn Jenner, missed the part which said it was up to each individual state to either allow transgender people use any bathroom or not because, Jenner released a video statement on various social media platforms lashing out at the President, saying he should call her. She said: 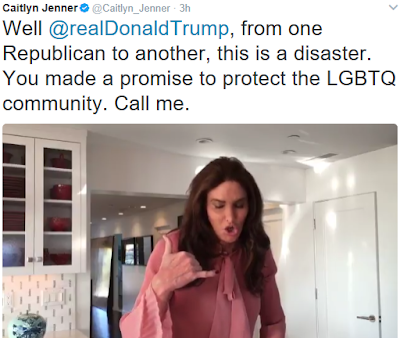 “I have a message for the trans kids of America: You’re winning. I know it doesn’t feel like it today or every day, but you’re winning,” Jenner said. “Very soon, we will win full freedom nation-wide and it’s going to be with bipartisan support. You can help by checking out the National Center for Transgender Equality and letting Washington hear you loud and clear.”

Watch the video below:

Well @realDonaldTrump, from one Republican to another, this is a disaster. You made a promise to protect the LGBTQ community. Call me. pic.twitter.com/XwYe0LNUOq