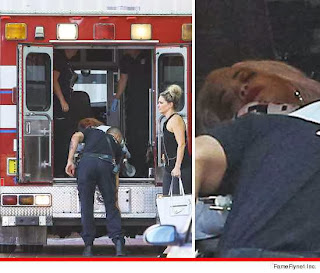 British pop singer and Jay Z's protege, Rita Ora slumped and collapsed on the set of her photo shoot in Miami Beach yesterday and was rushed to a hospital by ambulance according to photographers on the scene.

These new photos are to serve as promo pictures for her next campaign.

Photos show the 22-year old's eyes closed as she was being unloaded from the ambulance on a stretcher before being attended to by emergency personnel.

She was reportedly preparing for her photo shoot on the beach near the SoHo Beach House hotel when she fainted in her makeup trailer.

She's fine now according to her Personal Doctor.