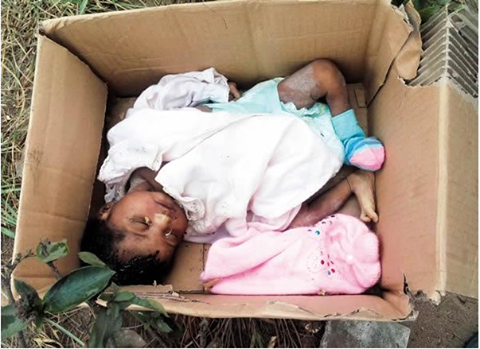 Residents were thrown into shock over the death of a baby found abandoned in biscuit carton along Ikot Ekpene Road in Uyo, Akwa Ibom state.The baby girl, neatly dressed and abandoned near a refuse dump, supposedly cried herself to death.
According to reports, the unidentified baby became pale after a long period of crying, before passing out.
One of the witnesses said the mother might have abandoned the baby because she considered it a witch or she might have been driven by poverty.
“There are lot of children being thrown away like this in recent times because the mothers think they’re witches or plagued by demon spirits or maybe for lack of what feed the children.” the witness said.
Mr. Okon Isaac, who was on his way to a fuel station along Ikot Ekpene Road, said he heard the cry of a baby near the refuse bin.
“I have been here since 5:47 am. I wanted to buy fuel from Total, which only sells the product when available between the hours of 4 and 6:20am. After this time, they stop selling pretending not to have the product. As I was passing, I heard the cry of the baby. I began to wonder where the baby was crying from, but when I got close to the refuse bin, just off the road, I saw a baby girl neatly dressed and dumped in a biscuit carton,” said Mr Okon.
“I could not go to Total in search of fuel again. I stayed behind to observe if the mother of the baby might change her mind and come back for the baby. And before long, people started to troop in as they heard the cry of the baby. As we live in a period of child theft and selling of children for money, people were scared to touch the baby. They all stood helpless, should anyone risk lifting the baby, and the police happen to be around, the individual can be accused of child theft, or whatever.” He added.
The police, who confirmed the incident said they were aware of the situation and had contacted the Ministry of Environment for necessary action.
Meanwhile, until the baby died; neither the police nor officials of the Ministry of Environment were seen at the scene.