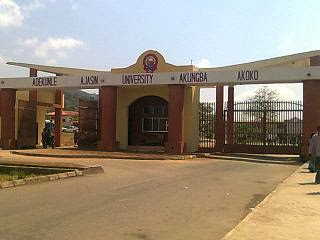 The crisis between the embattled members of the Academic Staff Union of Universities [ASUU], Adekunle Ajasin University [AAUA], Ondo state and their management is now deepened as new
lecturers have been employment to replace the striking lecturers.

Recall that when DailyPost visited the campus last Monday, some old lecturers were seen in various lecture rooms teaching , thinking the AAUA authorities and the striking workers have agreed to end the five months old strike.

However, with a statement later issued by the AAUA ASUU's Chairman, Dr. Meruyi Mekusi, insisting that they will not call off the strike until their national body orders them to do so might
have forced the management to recruit new lecturers.

Relatively, the Vice Chancellor of the institution, Prof. Femi Mimiko, has charged the newly recruited lecturers to key into the work ethics of the Institution and always observe the values of
the teaching profession.

Prof. Mimiko, who also enjoined the academics to be loyal to the University at all times, gave the charge on Monday last week at the Opening Ceremony of a two-day orientation programme organized by the Institution for the new
academics.

The VC said, "Our expectations from you on the job are to be in constant search for knowledge and devise the innovative way of dissemination.

There must not be mention of you in anything that is not worthy. Be role models to students and enhance their moral standard. You must be like
counselors to them at all times. Be shapers of opinions. Engage in constructive criticism of society. Be solution generators. Be focused and
play a big role in national development.
"AAUA is a public trust that is dedicated to building leaders.

You must, therefore, be loyal to the system. We expect you to give to this University an undiluted loyalty. We just launched AAUA ALWAYS as a new campaign. The message is that you must think about this University at all
times."

While the VC commended them for being found worthy of employment after rigorous interviews, he said that the orientation became necessary to expose them to AAUA culture.

He said, "This induction is to expose you to our own peculiar form of pedagogy that we want you to imbibe and to continue to sustain."

The VC was one of the four resource persons at the orientation programme and he spoke on "Who is an Academic?" He said the new intakes were supposed to teach, engage in research and
community service.

Prof. Mimiko urged those among them who were yet to earn Ph. D. to pursue it vigorously, saying, "For us, Ph. D. is a must have. Those who are yet to possess the Ph. D. should know that the most
important thing that we will ask when you get here is, 'How far you are going in the pursuit of knowledge, leading to the award of the Ph. D?" He promised that the University would give them support to undertake Ph.D. Programme in any
University of their choice.