Asari Dokubo: ‘I’m A Friend To Any Government In Power’ O_o

Asari Dokubo also congratulates Gen. Buhari. He said:
“I’m not a creation of jonathan before jonathan there was asari, after him there will be asari, i’m a friend to any
government in power.”

“This is an outrage, unbelievable”. 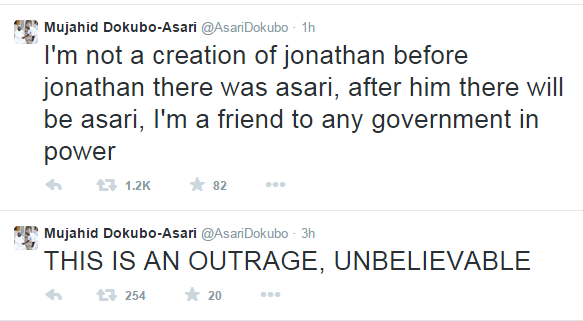 Alhaji Mujahid Asari-Dokubo (born 1964), formerly Melford Dokubo Goodhead Jr. and typically referred to simply as Asari, is a major political figure of the Ijaw ethnic group in
the Niger Delta region of Nigeria.

He was president of the Ijaw Youth Council for a time beginning in 2001 and later founded the Niger Delta
People’s Volunteer Force which would become one of the most prominent armed groups operating in the Niger Delta region.

“I Am So Proud Of My Husband” – Aisha Buhari, Nigeria’s new first lady speaks

Your Brand Is Bigger Than Kiddwaya, Stop Allowing Him Use You For Clout – Lady Tells Erica