The Peoples Democratic Party (PDP) Candidate in the just-ended governorship election in Lagos State, and in previous times, Mr. Jimi Agbaje, has dumped the party over an unresolved disagreement between him and the PDP leadership in the state.

This is contained in a statement made available to journalists in Lagos. Agbaje said it was necessary for him to leave the party after a series of allegations that arose after our party lost the governorship election in Lagos.

”I have tried to remain focused and ignore all the distractions coming from the leadership of the party.

I am making the decision after due consultations with my supporters and loved ones for the sake of peace.”

Mr Agbaje, however, did not give details on his next move and whether he will join another party.

This actually got FFK… got him to the heart and he WEPT! 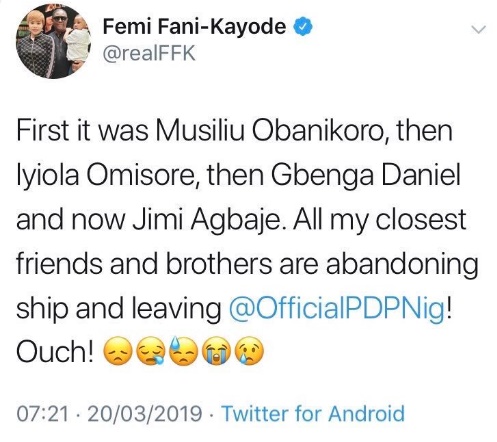 I Have Not Left PDP — Jimi Agbaje Insists

‘I Wish Kwarans the Best’ – Saraki Speaks after Shocking Defeat