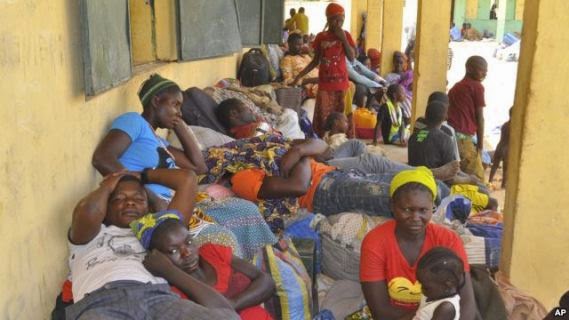 7,000 Nigerians who have been taking refuge in Lake Chad since Boko Haram attacks chased them from their villages in the North, are being forced out of Niger and back to Nigeria by the Nigerien military. The deportation started on Tuesday May 5th.
According to Voice of America, the Nigerians were forced out against their will following Boko Haram’s attacks on the island of Karamga in Lake Chad last month in which 74 Nigerien soldiers and civilians were killed. The Nigerians were deported in trucks and dumped in Yobe state by the Nigerien military. A photo of some of the Nigerians deported above.

Commenting on the deportation, Alhaji Muhammed Kanar, the northeast coordinator for Nigeria’s Emergency Management Agency NEMA , said, “From the first three days, we received nearly 4,000. And in fact, another batch of nearly 3,000 or above, we are now in the process of registration.”.

Karl Steinacker, Niger’s representative for the United Nations refugee agency, UNHCR, criticized the Nigerien government for sending the Nigerians back home and putting them at risk. Nigerians and Nigeriens lived around the Lake Chad but the Nigeriens were sent to communities and towns in Niger republic while the Nigerians who are taking refuge in the Lake Chad were deported to Yobe state in trucks.

“Those islands are home to both Nigerians and Nigeriens working in the fishing industry. But, while citizens of Niger are moving into cities and towns, Nigerians have nowhere to go but back across the border. People’s livelihoods have been destroyed because they have been told you can no longer live and work on the lake, and now they are told, OK, but in any event, we’ll take you back to your country. So they say yes… What other options do they have? Even if they are migrants, the question is, is it appropriate to send them back, and is it the right way it’s being handled, and I guess in both cases it is no,” he said.

When it gets to a stage, i will expose those who worked against Buhari – Oba of Lagos

Reports on Bashir Ahmad Presidential Jet for wedding: He reacts